Why is nuclear fusion so hard?

Why does water fall out of an inverted cup?

Before considering nuclear fusion, let's consider something much more familiar. If you turn a cup full of water upside down, the water falls out. Why is this? It seems obvious: with nothing supporting the water from below, gravity pulls the water out of the cup. But let's look a little closely at the left side of Figure 1. We have water in an inverted cup under the influence of gravity. But there is air pressure at the surface of the water. At sea level, atmospheric pressure is about the weight of 1kg per cm2, easily enough to keep the water in the cup. So now we still have our question: why does it come out?

Consider the diagram on the right of Figure 1. I have drawn some ripples on the surface of the water. Air pressure provides a force perpendicular to the water surface which means that around the ripples we no longer have a force pointing straight up. The force points partly sideways and this serves to deform the shape of the water surface. But as the water surface becomes even more deformed the forces become even more distorted away from vertical causing a feedback loop. So we can expect even the tiniest of ripples to grow to the point where the water completely changes shape and it eventually deforms its way out of the glass. 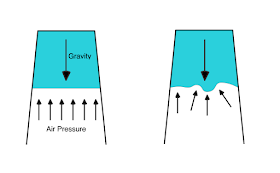 This is an example of an instability - in this case it's called the Rayleigh-Taylor instability. And this suggests an approach to keeping water in an inverted cup - suppress the ripples. One way to do this is to fill the cup to the top and place a piece of paper over the surface. Here is an example on YouTube:


Another approach is to apply thickening agents to the water to dampen the ripples. Here's an example showing how hard it is to get jello out of a bowl:

And now I can discuss one of the challenges facing controlled nuclear fusion. When two suitable atomic nuclei are made to fuse they release energy. But nuclei are positively charged and repel. So in order to cause nuclei to fuse we need to overcome this repulsion, typically by making them collide at very high velocities. To achieve this in useful numbers one way is to heat a suitable fuel to a high temperature in a small enough volume. Temperatures of at least 10,000,000K are required, and possibly orders of magnitude higher. We know how to do the heating, but we also have to confine the fuel - which at these temperatures takes the form of a plasma because its nuclei and electrons become separated. We can't simply use a solid container to hold the plasma as no container can survive such temperatures. Instead we need some other confinement method such as magnetic confinement, where we use magnetic fields to control the plasma, or inertial confinement where we use explosions around the fuel to drive the fuel into a small volume. Both of these suffer from the same problem: we're using a force to control a fluid and this is subject to instabilities. Confining a plasma is like trying to keep water in an inverted cup by blowing on the water with fans. It's really hard. What's more, plasma has incredibly complex dynamics that is subject to many different kinds of instability. Around fifty named instabilities are listed on Wikipedia. Here is an example of one in a real plasma. It is a kink instability that causes a line of plasma with a current through it to start acquiring a corkscrew shape so that it eventually tears itself apart:

And that's one of the biggest challenges facing fusion energy today: we don't know how to keep a plasma stable for long enough.

Is there any hope for fusion?

The description above is qualitative. To determine how severe any particular instability is we need to run experiments or use some theory. Some kinds of instability are slow enough that we can control them. For example bicycles are unstable, but many of us eventually learn to ride them. In a thermonuclear weapon stability is only required for a short amount of time, something that was achievable back in the 50s. And sometimes the feedback loops in the physics are less troublesome than might be expected so that Tokamaks (and other configurations) have operating modes that turn out to be relatively stable, for example the "H-mode". So maybe we'll have working fusion reactors in 20 years, or 30 years, or is it 50?
sigfpe at Saturday, December 08, 2018