The Three Projections of Doctor Futamura

The Three Projections of Futamura are a sequence of applications of a programming technique called 'partial evaluation' or 'specialisation', each one more mind-bending than the previous one. But it shouldn't be programmers who have all the fun. So I'm going to try to explain the three projections in a way that non-programmers can maybe understand too. But whether you're a programmer or not, this kind of self-referential reasoning can hurt your brain. At least it hurts mine. But it's a good pain, right?

A really simple example of a machine is one that has a slot for inputting blanks, and outputs newly minted coins:

That's a dedicated $1 manufacturing machine. We could imagine that internally it stamps the appropriate design onto the blank and spits out the result.

It'd be more interesting if we could make a machine with another input slot that allowed us to input the description of the coin. By providing different inputs we could mint a variety of different coins with one machine. I'm going to adopt the convention that when we want to input a description we input a picture of the result we want. I'll draw pictures as rectangles with the subject inside them. Here's a general purpose machine manufacturing pound coins: 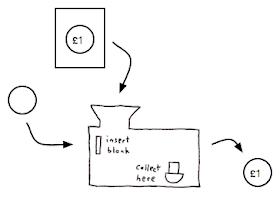 The same machine could make dollars, zlotys or yen. You could imagine this machine works by taking the description and then milling the coin CNC style. We call such a machine an interpreter. It interprets the instructions and produces its result.

The interpreter has a great advantage over the dedicated dollar mint. You make make any kind of coin. But it's going to run a lot slower. The dedicated minter can just stamp a coin in one go. The interpreter can't do this because every input might be different. It has to custom mill each coin individually. Is there a way to get the benefits of both types of machine? We could do this: take the coin description and instead of milling the coin directly we mill negative reliefs for both sides of the coin. We then build a new dedicated minting machine that uses these negatives to stamp out the coin. In other words we could make a machine that takes as input a coin description and outputs a dedicated machine to make that type of coin. This kind of machine making machine is called a compiler. It takes a set of instructions, but instead of executing them one by one, it makes a dedicated machine to perform them. Here's one in action: 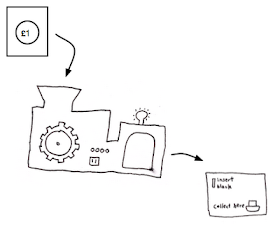 So here are the two important concepts so far:

The Projections of Doctor Futamura help make clear the relationship between these kinds of things.

We need one more important concept: the specialiser. Suppose we have a machine that has two inputs slots, A and B. But now suppose that when we use the machine we find that we vary the kind of thing we put into slot B, but always end up putting the same thing into slot A. If we know that slot A will always get the same input then we could streamline the machine using our knowledge of the properties of A. This is similar to the minting situation - if we know we're always going to make $1 coins then we can dedicate our machine to that purpose. In fact, if we know that we're always going to input the same thing into slot A we don't even need slot A any more. We could just stick an A inside the machine and whenever the user inputs something to slot B, the machine would then replicate the A and then use it just as if it had been input.

In summary, given a machine with two slots A and B, and given some input suitable for slot A, we could redesign it as a machine with just a B slot that automatically, internally self-feeds the chosen item to A. But we can often do better than this. We don't need to self-feed stuff to slot A. We might be able to redesign the way the machine works based on the assumption that we always get the same stuff going into slot A. For example, in the minting example a dedicate $1 minter was more specialised than just a general purpose minter that interpreted the instructions for making a $1 coin. This process of customising a machine for a particular input to slot A is called specialisation or partial evaluation.

Now imagine we have a machine for automatically specialising designs for machines. It might have two slots: one for inputting a description for a two slot machine with slots A and B, and one for inputting stuff suitable for slot A. It would then print out a description for a customised machine with just a slot B. We could call it a specialisation machine. Here is one at work: 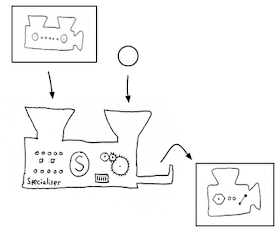 The process of specialisation is similar to what I was talking about with dedicated minting machines. Rather than just have a similarity we can completely formalise this. Note that the interpreter above takes two inputs. So the design for an interpreter could be fed into the first input of a specialiser. Now we feed a description the coin we want into slot B. The specialiser whirrs away and eventually outputs a description of a machine that is an interpreter that is dedicated to making that one particular coin. The result will describe a machine with only one input suitable for blanks. In other words, we can use a specialiser as a compiler. This is the first of Doctor Futamura's Projections. Here's a picture of the process at work: 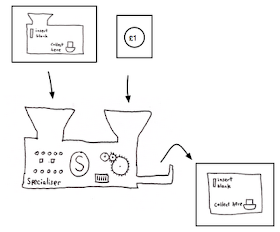 What this shows is that you don't need to make compilers. You can make specialisers instead. This is actually a very practical thing to do in the computing world. For example there are commercial products (I'm not connected with that product in any way) that can specialise code to run on a specific architecture like CUDA. It's entirely practical to convert an interpreter to a compiler with such a tool. By writing a specialiser, the purveyors of such tools allow third parties to develop their own compilers and so this is more useful than just writing a dedicated compiler. 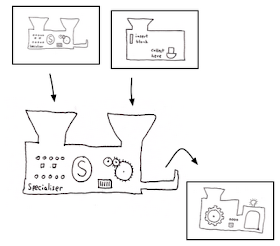 But what is that machine whose description it has output? An interpreter takes as input a description of how to operate on some stuff, like turning blanks into coins. In effect, the output machine has the interpreter built into it. So it takes descriptions and outputs a machine for performing those instructions. In other words it's a compiler. If the specialiser is any good then the compiler will be good too. It won't just hide an interpreter in a box and feed it your description, it will make dedicated parts to ensure your compiler produces a fast dedicated machine. And that is Doctor Futamura's Second Projection. 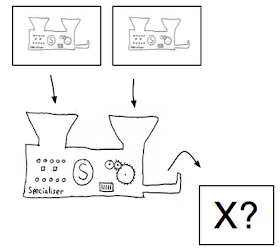 If we have a specialiser we never need to make a compiler again. We need only design interpreters that we can automatically convert to compilers. In general it's easier to write interpreters than compilers and so in principle this makes life easier for programmers. It also allows us to compartmentalise the building of compilers. We can separate the interpreter bit from the bit that fashions specific parts for a task. The specialiser does the latter so our would-be compiler writer can concentrate on the former. But who would have guessed that passing a specialiser to itself twice would give us something so useful?

So here are the projections:
There are lots of variations we can play with. I've just talked about descriptions of things without saying much about what those descriptions look like. In practice there are lots of different 'languages' we can use to express our descriptions. So variations on these projections can generate descriptions in different languages, possibly converting between them. We might also have lots of different specialisers that are themselves optimised for specific types of specialisation. The Futamura projections give interesting ways to combine these. And there are also variations for generating dedicating machines for other tasks related to compiling - like parsing the descriptions we might feed in as input. If you want to read more on this subject there's a whole book online with example code. They're not easy things to design. I think that specialisation is a killer feature that I'd like to see more of. Present day compilers (and here I'm talking about computers, not machines in general) are hard-coded black boxes for the task of compilation. They're not very good at allowing you to get in there and tweak the way compilation occurs - for example if you want to generate code according to a strategy you know. Specialisation is a nice alternative to simply bolting an API onto a compiler. It would make it easy for anyone to write optimising and optimised compilers for their own languages and combine such compilers with interpreters for interactive instead of offline compilation. I learnt about this stuff, as well as lots of other stuff in my blog, from the excellent Vicious Circles. The theory is closely related to the theory of writing quines that I used for my three language quine. And if you keep your ears to the ground you can hear rumours of a fabled fourth projection... Appendix

I wanted to address some of the comments so I've added an appendix where I use the Haskell type checker to tighten up the statements I make above. There are some places I made some choices and I decided to make the specialiser output machines rather than pictures. This code doesn't actually do anything.

One important thing to note is that with these definitions the first projection is a function describing the action of a machine after it has been given one input. The second and third projections are dedicated machines.

I'm not actually going to built a Futamura specialiser so the right hand sides hare are just filler:

Running a machine gives a way to perform what the machine is designed to do. We're not really running machines in Haskell so we have an undefined right hand side.

A specialiser is a machine that takes as first input a picture of a process mapping an a and a b to a c. It also takes as argument the specialised value for the input for the process. It then outputs a dedicated machine for the specialised process:

We actually need the picture of the specialiser as it's going to be specialised:

For the first projection we'll need an interpreter. An interpreter is a general purpose machine that takes pictures of how to map an a to a b, as well as an actual a, and can then give you a b:

And what we really need is a picture of an interpreter:

The second projection is a dedicated machine that does the task of proj1. So it's a compiler:

An interpreter is something that can take a computer program and some input and generate the output you expect from the program. A compiler, on the other hand, converts programs into dedicated machines to process the input into the output. And that's exactly what the third projection does: